US real estate is a booming property market. Demand is strong and supply limited with inventory levels well below the 6-month point of equilibrium. The current imbalance between the mass of demand and shortage of properties has led to a boom market in certain parts of the US.

Local Market Monitor recently published their list of the top 25 boom markets for US real estate in Forbes. The article points out that “boom markets don’t come along very often” and lists the few occasions when US property has entered boom territory. Houston in the mid-1980s and Southern California in the early 1990s are two examples cited.

However, today’s situation is very different with booms back in earnest and in a number of locations throughout the US. As the article says, “home building lagged almost everywhere in the last decade while strong economic growth has pumped up demand for housing”. As a result, at least 25 metro areas are currently experiencing a boom market in US real estate.

How to identify a boom

Local Market Monitor uses several criteria to identify boom markets. One of the main figures used is the difference between average property prices and local income prices. Once this figure exceeds 15%, the metro area enters the boom part of the real estate cycle. The current table ranges from 16% in Sacramento to 47% in Denver.

The survey points out that during a boom, “home prices take on a life of their own, increasing at a high rate for several years”. Investing at the early stage of the boom has the best investment potential, particularly regarding capital appreciation. All 25 markets classed as booming have seen price increases over 8% in the last year.

The local economy is another important factor in a boom market. Strong job creation attracts relocators who in turn boost population levels and drive demand for housing. As Local Market Monitor says, “if you buy at the early stage of a boom, you can expect a big increase in value in just a few years”.

Most boom markets in California and Florida

The two states dominating the 25 boom markets are California with a total of six metro areas featured in the list and Florida with five. The Sunshine State ticks all the boxes including more affordable house prices than Californian destinations. 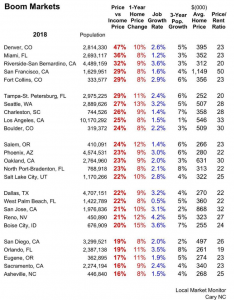 Denver sits in the top position representing the best boom market for US real estate. The differential between property prices and local income soars as high as 47% in the Colorado metro. The city also registers strong economic growth with high figures for job creation and population increase. The report states, however, that prices are already in full boom.

Miami takes second place overall behind Denver. Miami property prices have gone up by 8% of the last year and the city marks up a 36% difference between price and local income. Like the rest of Florida, the Miami metro area has experienced strong population growth over the last years (3%), although the 1.2% job creation is among the lowest in the Florida table.

Just slightly further down the table in sixth position is the Tampa metro area. Here, house prices have gone up by 11%. The number of inhabitants has gone up by 6% in three years and job creation by 2.4% in 12 months. Tampa real estate comes in considerably cheaper than Miami at an average of US$252,000, a full US$100,000 less.

Other Florida locations representing a booming market in US real estate include North Port and West Palm Beach. In both metros, property prices have gone up by 8% over the last year. North Port has registered particularly high population growth (8%) in three years.

Closing the Florida boom market list is Orlando, no stranger to lists of hot spots for property investment. Florida’s theme park capital saw house prices rise by 11% in a year when job creation grew by 3.5%, the third highest on the table.