The millennials represent the largest generation in the US and exercise huge influence on the consumer and housing markets. A recent survey earmarks their favoured spots for relocation and three Florida metros feature in the top ten places to move to for millennials.

The so-called millennial generation – the label given to those born between 1981 to 1997 – accounts for a sizeable part of the American population. The over 75 million millennials make up almost a quarter and represent nearly two-fifths of the US working population.

A recent survey carried out by the Brookings Institution, The Millennial Generation: A Demographic Bridge to America’s Diverse Future, puts this population group under the microscope. It examines their ethnic diversity, their education and discovers where they live in the US.

The millennial generation has no fear of relocation. In fact, this group of people aged between 21 and 37 are among the most mobile ever. The Brookings Institution survey finds that millennials are moving away from the east and north of the US in favour of states and metro areas in the south and west of the country. 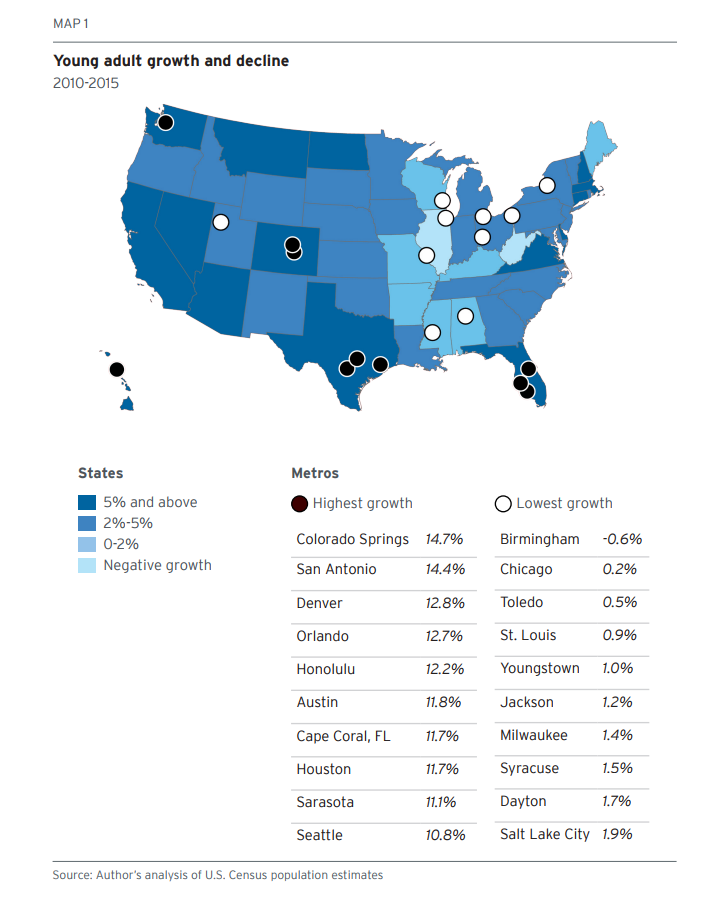 In the list of the top ten most favoured metros for millennials between 2010 and 2015, Texas and Florida take six of the places. Florida, traditionally a state with an older population, is now attracting more millennials than ever before.

Fourth in the national ranking is Orlando, one of the most dynamic Florida metros and the Sunshine State’s favourite holiday spot. The growth of the millennial population in Orlando in the five years to 2015 reached 12.7%, almost three times the national rate of 4.7%.

Texas metros also feature among the favoured spots for millennial relocation. San Antonio takes the second most popular spot with an increase of 14.4% in its millennial population, just 0.4% below the highest of all. Colorado Springs, Austin and Houston also register strong rises in their millennials with the population rising by 11.8% and 11.7% respectively.

Opportunities in Texas and Florida metros

Texas and Florida share strong economic situations and high job creation. These factors plus their warm climates and wealth of leisure opportunities mean they stand out as relocation destinations for millennials.

Florida has registered particularly bullish figures. The state was on track for 3.1% GDP growth in 2017 and analysts forecast 4.8% this year. Job creation increased by 2.4% last year, 0.8% higher than in the US as a whole.

The influx of millennials creates opportunities in the property markets within the two states. Since this generation typically has high student debts and prefers the flexibility of rentals, they represent big potential for buy-to-let investment in Florida and Texas.