FLORIDA TOURISM BREAKS YET ANOTHER RECORD IN 2018

Florida tourism continues to break its own records when it comes to visitor figures. 2018 saw the highest number ever and notched up the eighth consecutive year of records. In total, 126.1 million tourists chose to holiday in the Sunshine State last year.

Figures recently released by the Florida tourism authorities, Visit Florida, estimate that just over 126 million people visited the state in 2018. This represents the highest figure on record and 6.2% growth on 2017. In a decade, Florida has seen its visitors soar from 80.9 million, an increase of 55.9% in just ten years.

The main reason behind the hike in visitor figures in 2018 lies in the increase in domestic tourism. Every quarter last year saw a rise in the number of Americans taking a holiday in Florida as can be seen in the graphic below. Q3 showed particularly strong results with 27.5 million out-of-state tourists visiting the Sunshine State. The figure represents an increase of 11.6% year-on-year. 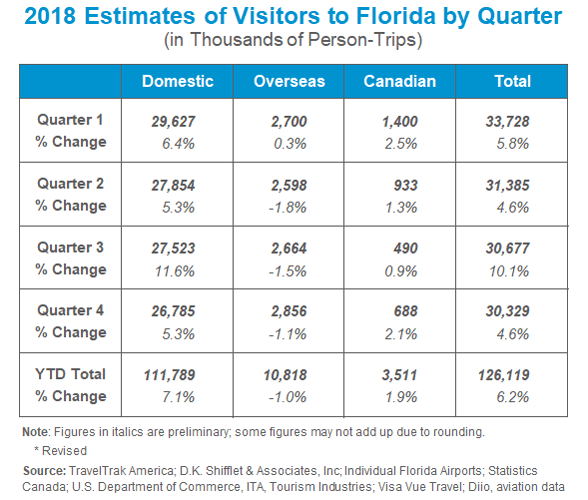 2018 statistics prove that Florida remains the favourite holiday destination for Americans. US tourists are drawn to the state’s year-round warm climate, stunning coastline and theme parks.

Canadian visitors also form an important part of Florida tourism, particularly the so-called snowbirds – Canadians who spend the winter months in Florida. In 2018, some 3.5 million Canadians went to the Sunshine State, a rise of 1.9% on 2017.

While domestic tourism boomed in Florida, international visitor figures dropped slightly in 2018. According to Visit Florida estimates, just over 10.8 million international tourists holidayed in the state, a drop of 1%.

The decrease is, however, lower than the previous year. The number of foreigners visiting Florida in 2017 fell by 2%.

Best beaches in the US

Part of Florida tourism’s success lies in its coastline. The Sunshine State boasts some of the best beaches in the US. A recent survey among TripAdvisor users revealed that 40% of the 25 best beaches in the country are in Florida. Penascola Beach, known for its “pristine beauty”, received the highest ranking and stood in fifth position.

Tourism forms the backbone of the Florida economy and provides one of the main sources of job creation. Official figures estimate that around 1.4 million residents are employed in Florida tourism, a figure that increases every year in tandem with higher figure visitors. Economic impact is also significant. The latest study released by Visit Florida for 2017 revealed that visitors to Florida spent US$112 billion.

Many holidaymakers return year after year to the Sunshine State and are an important source of income for holiday let owners. Florida real estate also benefits from tourism – purchases by foreigner buyers made up 19% of all transactions in 2018.