Brazilian economy news for the month of July makes good reading. Many of the statistics show the country remains on track towards full economic recovery. Both inflation and interest rates went down and Brazil registered record trade figures. Industrial production also rose along with levels of foreign investment.

Figures throughout 2017 so far have been so good that analysts are expecting a record this year of US$60 billion. If the prediction is fulfilled, trade surplus will see an increase of almost 26% on 2016.

Industrial production also rose in July and brought the increase over the first six months of the year to 0.5%. This is the best figure for a semester since 2013.

On the interest rate front, the Brazilian Central Bank cut rates further. Their latest move on 26 July brought the Selic interest rate down to 9.25%, the lowest for almost four years.

If the economy continues on track, expectations are for more interest rate cuts – the latest is the seventh since October last year. General consensus is for the Selic to fall to below 8% by the end of the year, possibly as low as 7.75%.

Inflation too formed part of the good Brazilian economic news in July. It fell to 2.78%, its lowest rate for 18 years and well below the government target. Lower inflation brings good news for consumers whose salaries become more competitive. This in tandem with lower interest rates is widely expected to boost sales in the Brazilian property market, currently also posting bullish results.

Further good Brazilian economic news comes in foreign investment with the country continuing to post high levels. In the year to May, foreign direct investment (FDI) reached US$80.7 billion. January this year was a particularly good month when FDI soared to levels well above those registered for the last four years. 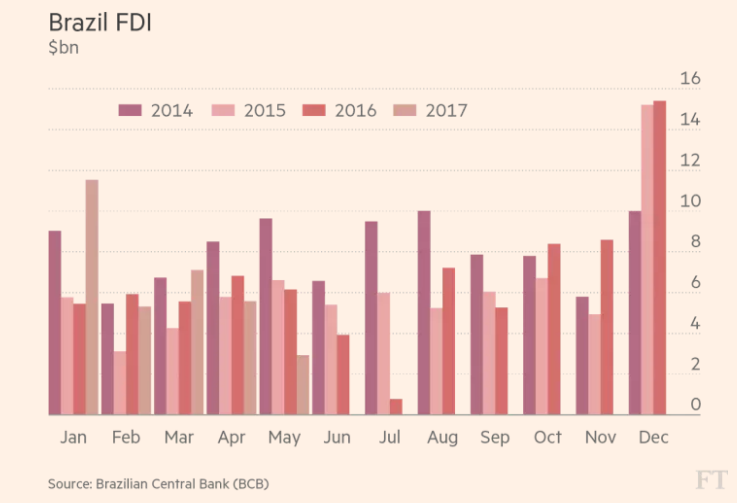 Figures for last year totalled US$73.93 billion, which according to Dealogic data cited by the Financial Times, was the seventh highest in the world. Mergers and acquisitions concentrated almost half FDI and this sector was dominated by foreign investors. China took the lion’s share with the US and Canada close behind.

“Many investors that have a medium to long-term strategy see this as a good opportunity to gain a foothold or increase their existing footprint in the Brazilian economy,” said Alberto Ramos, economist with Goldman Sachs and quoted by the Financial Times.

The Brazilian stock market, the IBovespa, followed suit and also rose in July. It went up by 4.8% over the month, its highest increase in seven months. Commodity stocks had a particularly good month – those for iron ore increased by 13.5%.

Ceará economy a cut above the rest of Brazil

Be awed on holiday in Ceará, Northeast Brazil