THE KEYS TO THE US RENTAL MARKET

A recent report on the US rental market finds that rates and occupancy have risen steadily over the last decade. Furthermore, Americans appear to favour renting over buying a home. Affordability remains an issue across the board, although the median income among rental households have risen.

The report compiled by the NYU Furman Center, an organisation that specialises in housing studies, was released in October. The 2017 National Rental Housing Landscape looks at US rental market trends in the 53 largest metropolitan areas (metros) across the country using statistics from 2006 to 2015. Between them, the 53 metros represent 165 million people, some 63% of the US population and 60% of the country’s housing stock.

Rates in the US rental market

The report finds that rental rates rose in almost all metros between 2012 and 2015. Median rents stood at US$1,050 a month, although this figure masks huge regional contrasts. The highest rents were paid in San José, California where the average stood at US$1,840. At the opposite end, Birmingham in Alabama had a median rate of just US$710.

Rental rates have recently risen more sharply. The report claims that monthly fees for rentals taken up in the last 12 months are considerably higher than those for units rented earlier. In San José, the difference runs to over US$600 and in Tampa it approaches 9%.

Another fundamental trend revealed in the report comes in the number of households in the US rental market. “Most households that move rent, rather than buy, their next home,” says the report. Specifically, 75% of households who had moved in the last 12 months were renting a property to live in.

The actual percentage of the population renting varies greatly from one metro to another, but it rose in almost all the 53 included in the report. For example, in Houston the number of rental households rose from 36% in 2006 to around 41% in 2015. In Tampa, the percentage reached 37% in 2015, up from 29% less than a decade earlier.

NYU Furman Center attributes the rise in renting households between 2006 and 2012 to the hike in foreclosures. The economic recession forced many households out of their owned properties and into rentals. However, since 2012, the US economy has experienced a strong uptick in both its economy and unemployment. The rise in rental households therefore points to an underlying social preference for renting rather than buying.

Affordability in the US rental market

Although the report detects an increase in renters with a higher socioeconomic status, affordability remains an issue among renters. In general terms, households should spend no more than 30% of their income on rent. In 2006, 82% of recently available rental properties were affordable to the median income household. In 2015, this had dropped to 75% of available stock. 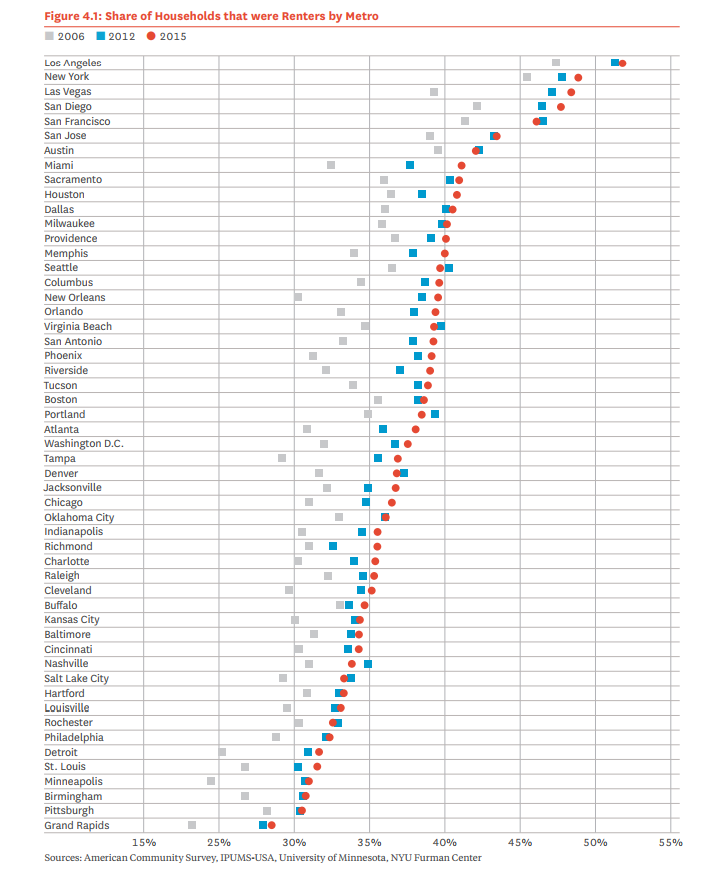 The NYU Forman Center also examines the supply of rentals available on the US market in tandem with occupancy levels. These two figures clearly reveal the sharp rise in rentals since although the number of rental properties has gone up, vacancy rates have fallen.

But despite the increase in the number of rental properties, vacancy rates fell. In 2006, the national rate stood at 7.8%. Nine years later the figure had dropped to 5.2%. This underscores the trend favouring returns across the US.

Huge demand for rental properties in the US

All rise for the US property market in 2016

US Rental Rates Reach Their Highest Ever