Rental rates continue to climb across the US, according to the latest figures for March. They currently stand at their highest ever and show no signs of falling. Within the national rankings, Jacksonville in Florida posted the third highest rise with other metros in the Sunshine State ahead of the national average. This represents good news for investors in US buy-to-let properties.

Since the end of the economic crisis, renting has increased in popularity and this combined with lack of supply has led to a continual increase in rental rates. In March, the annual rise reached 3.2%, bringing the average rent for a US property to US$1,430.

As the graphic below clearly shows, rental properties in the US have seen steady upward growth since mid-2010. The figures reported by RentCafé showed that rental rates went up in 92% of the 253 cities included in the survey. Just 2% registered a drop in rates, proving that US buy-to-let properties continue to offer excellent investment potential. 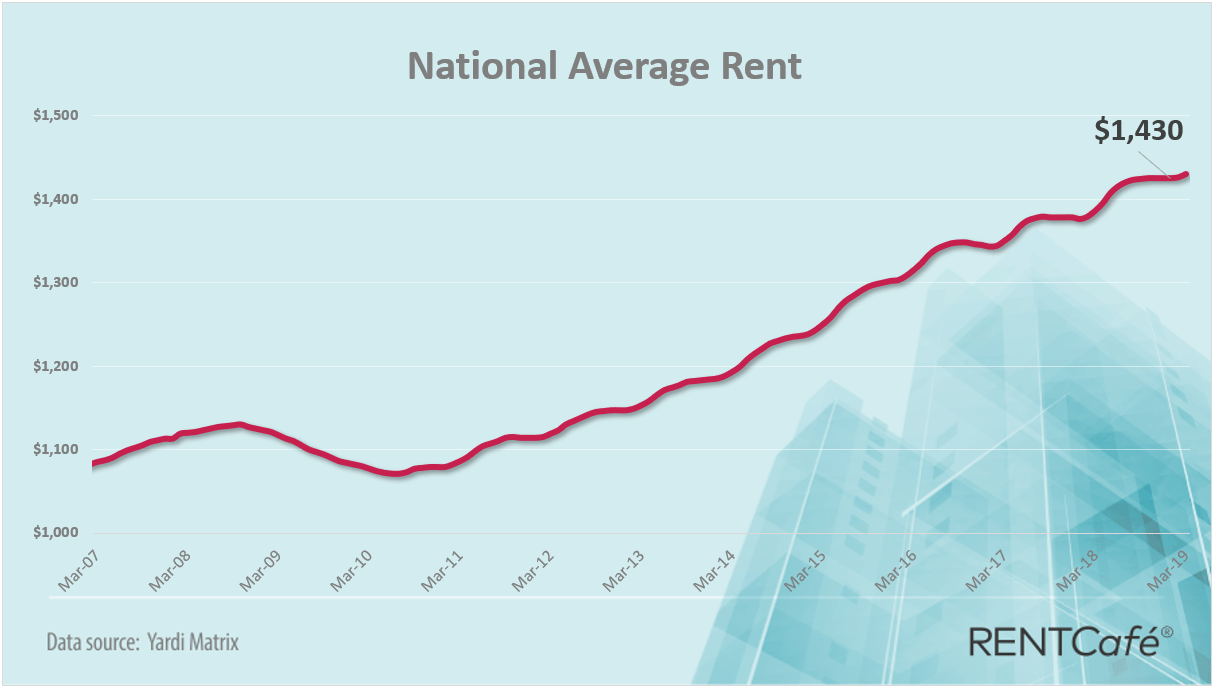 “A majority of the robust cities are being driven by some combination of tourism, recreation and the attraction of lifestyle amenities,” said Doug Ressler, Director of Business Intelligence at Yardi Matrix. He also offered a further explanation for the drive behind rising rental rates – “a unique niche” in each community.

On average, rental rates rose by US$44 a month in the year to March, but this increase was much higher in smaller cities. At the top of the ranking stand two cities in Texas: Midland and Odessa. The rise in annual rental rates reached 14.6% in Midland and 13.3% in Odessa.

In keeping with recent trends, Florida metros also experienced higher than average rises in rentals. Jacksonville saw a 6.3% increase in rentals, bringing the average to US$1,074 in the metro area. The uptick in rates was the third highest in the country for larger cities.

In Tampa, rentals went up by 4.1% in the year to March making the average price US$1,298. Orlando, a metro area used to hikes in rental rates, posted a 3.9% rise in monthly rents. The figures confirm the good performance of US buy-to-let properties in the Sunshine State.

Most expensive rentals in the US

Average rental rates for properties in Florida remain far below the country’s highest. In March, Manhattan took the top position again for the most expensive rentals in the country. Tenants in this part of New York pay an average of US$4,141 a month. In second place was San Francisco, another of the most expensive cities for US real estate, with an average of US$3,619.

At the other end of the scale was Wichita, America’s cheapest city for rentals. In this Kansas location, tenants pay an average of US$645. Tulsa in Oklahoma stood in second position with US$687.

Potential for US buy-to-let properties

The shortage of available property together with rising house prices mean that renting is an ever-increasing option among Americans. The buoyant job market in the country also makes renting popular for relocation reasons. In turn, these factors contribute towards the rise in rental rates.

Buy-to-let property in the US has performed well since the economic crisis. Continued demand for rental property and the steady hike in rental rates augurs well for the future of this investment sector.

Why US buy-to-let investment has plenty of potential