Anyone watching the US market over the last year will have noticed price hikes almost across the country. Double-digit rises have been commonplace. But what is the risk of a US property market bubble? A survey by Arch MI reveals that it’s minimal.

The Arch MI Risk Index takes a comprehensive look at the real estate market in the US. Examining numerous factors such as population growth, unemployment, job creation and affordability levels, the resounding conclusion of the report is that there’s no real risk of a bubble.

Several fundamentals are currently working against the possibility of a US property market bubble. They include a strong job market – the US economy created 261,000 jobs in October alone. Unemployment dropped to 4.1%, the lowest level since 2008.

Another factor in favour of the property market comes in interest rates, still relatively low. Inventory levels across the US also remain very low – in Q2, they stood at 4.2 months.

“Anyone waiting for home prices to fall before buying is likely to be disappointed”, says the report. “The hottest markets are being propelled by job growth that is increasing faster than the new supply of homes and that isn’t likely to change anytime soon.”

Rising prices contributed to the last US property market bubble and some analysts have voiced concern that current price hikes could lead to the same. The report examines price rises in detail and specifically compares them to inflation rates.

The conclusion is that although prices have gone up, when adjusted for inflation, US property remains on average 10% below its peak price (reached in 2004-2008). 46% of the metros studied in the report currently have property prices below their peak. This statistic suggests there’s still room for growth in almost half the markets.

Despite the generally favourable situation, there are still pockets in the US where there’s a risk of price drops. States with economies reliant on energy production are among the hardest hit.

Alaska has the highest risk. In this state, Arch MI claims there’s a 39% risk of property prices dropping in the next two years. The Alaskan economy remains in recession and has poor employment prospects.

North Dakota with a 33% risk and Wyoming with 31% complete the list with the highest risk from a US property market bubble. Wyoming with a recession, negative population growth and low home price growth currently has little to commend it as a place to buy property. 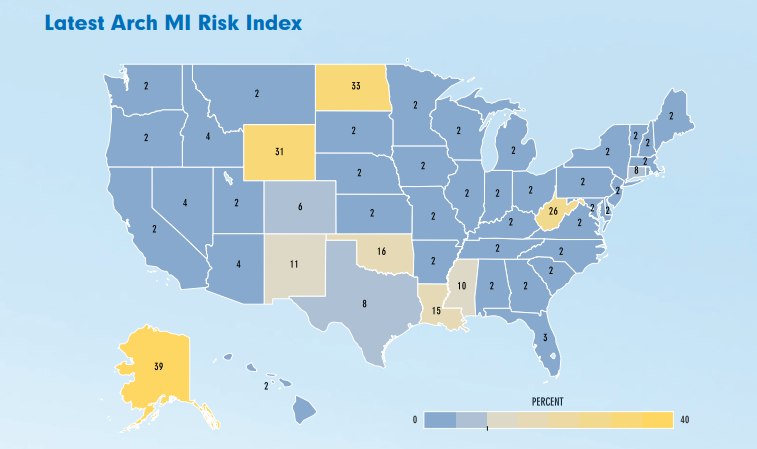 The rest of the US remains clearly far from risk. As the graphic from the Arch MI report shows, the vast majority of states hover around the 2 to 5% possibility of house price drops.

The report highlights Florida within the national context. “Florida will remain the best economic performer in the South for at least another year, led by tourism, residential and public construction,” it says.

The report covers 50 of the largest metro areas in the US and reveals two metros with a higher than average risk of lower property prices in the next two years. Fort Lauderdale-Pompano Beach-Deerfield Beach in Florida tops the list with a 35% possibility followed by Nashville with a 33% chance.

The report points out that this situation is mainly due to affordability issues and lack of supply. In Q1 this year, housing starts in Fort Lauderdale stood at just 1 per 1,000 people. The remaining 48 metro areas, however, have a minimal risk of a housing bubble.

Florida metros are performing well in population growth and employment, both essential in a healthy market. Orlando registered the highest rise in population in the country in Q1 2017 when it grew by 3.1%. Jacksonville and Tampa also registered strong growth (1.9% and 1.7% respectively). Unemployment levels in the three metros range from 3.8% in Orlando to 4% in Jacksonville. According to Arch MI, the risk of a US property market bubble remains low almost across the board.

Supply plummets on us property market

Strong Mid Year Forecast For The US Property Market

All rise for the US property market in 2016