For the Americans, property investment is the best long-term choice for their money. Standing well ahead of other investment options, property ranks as the favoured haven for money over stocks, bonds and gold. The turn-around in the US property market with house prices on the rise is one of the main reasons behind their choice. This BRIC Group news article explains the phenomenon.

In a Gallup poll carried out in late April, Americans were asked to choose their best long-term investment from five possibilities. These were property, gold, stocks and mutual funds, savings accounts and bonds.

Over a third favour property investment

As it did last year, property investment ranked top over the other options. However, the surprise this year came in the rise in the number of Americans now favouring real estate as a haven for their money. While five years ago the number of Americans opting for property investment was just 19 per cent, in this year’s poll the total has risen to 35 per cent. 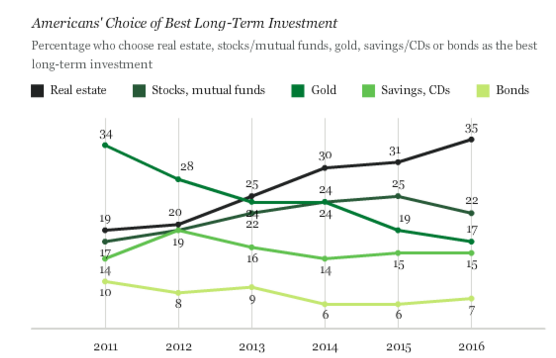 This percentage is considerably higher than the nearest competitor – stocks and mutual funds counted as the top option for 22 per cent of those polled. Gold was the favourite for 17 per cent, while savings accounts and bonds appealed to 15 and 7 per cent of those surveyed respectively.
Over the last five years gold and property have switched positions in the poll. In 2011 when the US property market was still deeply affected by the economic crisis, gold stood at the top with 34 per cent of Americans perceiving it as the best long-term investment option. In the same year, real estate investment was the preferred option for just 19 per cent.

Five years later, the two have completely reversed their positions. Gold prices have plummeted – between 2011 and 2015, they fell from US$1.910 to US$1,254 an ounce – so the number who favour it for long-term investment has halved, while property investment has almost doubled.

The upward trend in the number of investors favouring property mirrors the uptick in the US real estate market. Average house prices have recovered spectacularly from the crash they experienced during the crisis as is clearly illustrated by the figures for US property in March.

According to the National Association of Realtors (NAR), sales of all property in the US went up by 5.1 per cent over the year to March. Prices followed a similar pattern and the median sales price reached US$222,700, 5.7 per cent higher than March 2015. This latest hike registered the 49th consecutive month of price rises.

A sign of the intense activity in the US property market can be seen in the inventory figures. While the supply of homes available on the US market rose slightly in March compared to February, it still sits at 1.5 per cent lower than a year ago. In the words of Lawrence Yun, NAR chief economist, “buyer demand remains sturdy”.

The Gallup poll clearly reflects the current national tendency and although stocks and shares too have recovered considerable ground after the economic crash, Americans appear to have more confidence in property investment.

“It has been interesting to see how the Americans have renewed their faith in the property market,” says Dies Poppeliers, Managing Director at BRIC Group. “Property will undoubtedly continue to offer solid investment on the back of high demand and short supply.”

Rentals Future for US Property Market?

Which are the US property markets to watch in 2017?