US FORECLOSURE PROPERTIES LOWEST FOR 11 YEARS

The number of US foreclosure properties dropped to its lowest for over 11 years in Q3 this year. The quarterly figures bring foreclosure activity in the country to below the pre-recession average. Florida has moved out of the top five states with the highest rate of foreclosures.

The latest report from ATTOM Data Solutions on the state of US foreclosure properties between June and September this year shows a significant improvement. By the end of Q3, some 191,824 properties had foreclosure filings in the country.

The figure translates to a drop of 13% since the previous quarter and a fall of 35% when compared to the same quarter last year. Furthermore, the rate is the lowest since Q2 2006, more than 11 years ago. The data shows foreclosure activity down 31% on pre-recession averages.

High-risk loan properties out of pipeline

The huge drop in foreclosures signals the end of a cycle within the US property market, badly affected by so-called toxic mortgage loans in the 2000s. “Legacy foreclosures from the high-risk loans originated between 2004 and 2008 have largely been cleared out of the distressed market pipeline,” said Daren Blomquist, senior vice president at ATTOM Data Solutions commenting on the figures for Q3 this year. 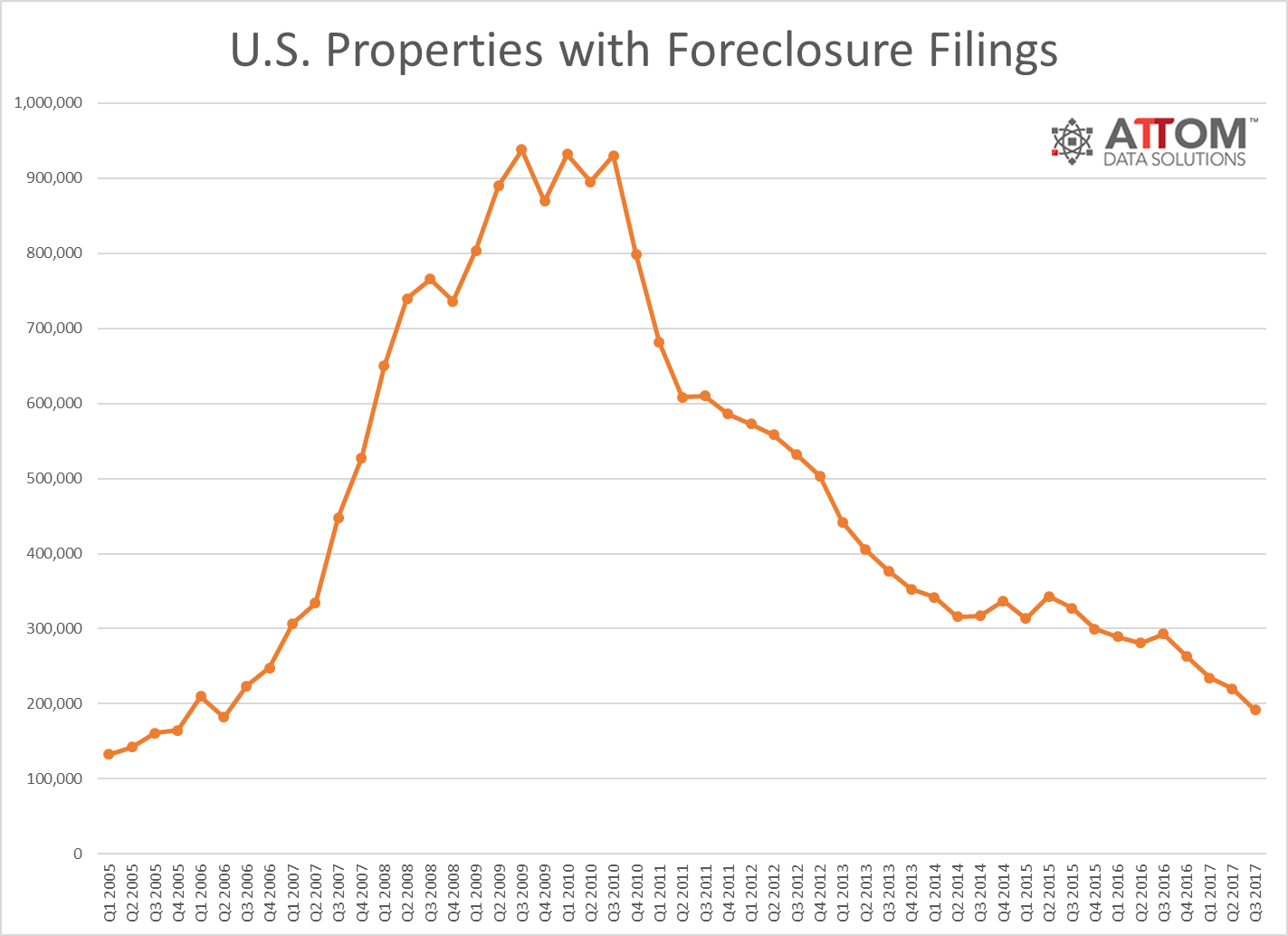 He also pointed out the drop in the number of foreclosures starts between June and September. Mortgage lenders initiated foreclosure proceedings on just over 93,700 properties in Q3. This is 7% less than the previous quarter and 16% lower than a year. More importantly, it’s the lowest level on ATTOM records, which began in Q2 2005.

The fall in foreclosure activity to below pre-recession levels extended nationwide with 57% of metro areas registering such figures. Highlights include Dallas with 77% below, Houston with 63% and Miami with 51% below.

The states registering the highest rates for US foreclosure properties were New Jersey, Delaware and Maryland. In New Jersey, the rate stood at 1 property per 238.

New Jersey doesn’t fare much better when it comes to metro areas with high foreclosure activity either. The state takes the top two positions. Atlantic City has the nation’s highest foreclosure rate – 1 in every 150 properties is at some stage of the foreclosure process in this metro area. Trenton has a slightly lower rate of 1 per 234 properties.

Since 2016, Florida has experienced a marked improvement in foreclosure activity in the state. It no longer features at the top of the list of US foreclosure properties and in Q3 2017, didn’t appear in the top five. However, the Sunshine State’s foreclosure rate of 0.06% still sits marginally above the national rate of 0.05%.

The ATTOM report on US foreclosures finds that foreclosure starts are down in all major metros areas in Florida with the exception of Naples-Immokalee-Marco Island. In the year to August (latest figures available), the number of closed sales of foreclosure properties in Florida fell by 45.4%. Median sales prices, however, rose by 10.3%. Both figures indicate the strong recovery of the Florida property market.

5 Predictions for the US property market in 2018

US new home market on the rise