US REAL ESTATE BACK IN RENTAL TERRITORY AFTER NEARLY 20 YEARS

After almost two decades, US real estate has returned to rental territory. The latest survey comparing homeownership against rental reveals that for the first time in almost 20 years it makes more sense financially to rent a home than it does to own. This reiterates the potential for rental return from buy-to-let properties in the US.

The Beracha, Hardin & Johnson Buy vs. Rent Index, published quarterly by Florida Atlantic University and Florida International University, looks at the figures behind owning or renting a home. The latest edition reveals that for the first time since June 1999, US real estate as a whole has crossed back into rental territory.

The BH & J Index has been taking a look at wealth accumulation from renting and home equity for more than 36 years. It compares the ratio of wealth gained from renting and reinvesting to that gained from home equity. A score of 1 indicates renting a home as more favourable for wealth creation. A score of -1 shows the opposite – homeownership is more profitable and a score of 0 suggests a balance between the two.

As the image below clearly shows, US real estate has experienced three clear cycles since the Index began in 1982. The property market began heavily in favour of ownership where it remained until 1999. The period of rental territory lasted just over ten years before returning to homeownership. 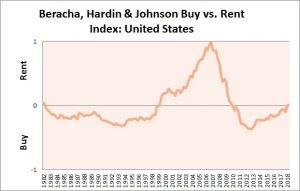 The BH & J Index covers a total of 23 US metros. The latest edition reveals that in 16 of these metro areas it’s better to rent than own in financial terms. In cities such as Houston, Los Angeles, Miami, San Francisco and Seattle, those looking for a home would be better off choosing to rent rather than buy.

All 16 are experiencing a drop in demand for homes to buy leading the Index’s creators to predict a possible downturn in property prices. “It is clear that we are at a point where markets will begin to see downward pricing pressure,” said Ken Johnson, a real estate economist and one of the creators. “This implies that in some markets annual pricing increases will begin to slow.”

This shift of US real estate territory has big implications for the rental market, already stretched and experiencing steady monthly rises in rates. Potential for buy-to-let investment in the US therefore increases as households make the decision to rent rather than buy a home.

Florida Tops Trends for US Real Estate in 2019